The World in Relief

Around 1830-1840, those who enjoyed the pleasure of viewing in relief used to look at representational drawings in perspective or geometric constructions. Relief photography enthusiasts were enjoying a foretaste of a more spontaneous photography: as those pictures were viewed through magnifying glasses, their size could become smaller, the camera was therefore less bulky and easier to carry and their exposure time shorter, as a small plate requires less light for its exposure. Stereoscopic photography played its part in popularising photography.

At the beginning, one used a single camera that one moved laterally along a stand between two views. Soon it was considered an improvement to move the lens to save having to move the camera, with an internal divider to avoid the views overlapping. Next two cameras were combined into one, with the advantage of having the simultaneous exposure of the two pictures. It was John Benjamin Dancer, a Manchester optician, who in 1856 invented the first double-lens camera.

The stereogram also became an article that one could buy and collect. In 1851, Louis-Jules Duboscq produced and marketed the first stereoscope, conceived by the Englishman David Brewster. Opaque pictures could be seen by opening a cover fitted with a mirror to illuminate them, while transparencies, which appeared from 1855, could be viewed directly in daylight through a frosted glass placed on the front. In 1861, an American, Oliver Wendell Holmes, invented the open stereoscope, which was light and easier to use. 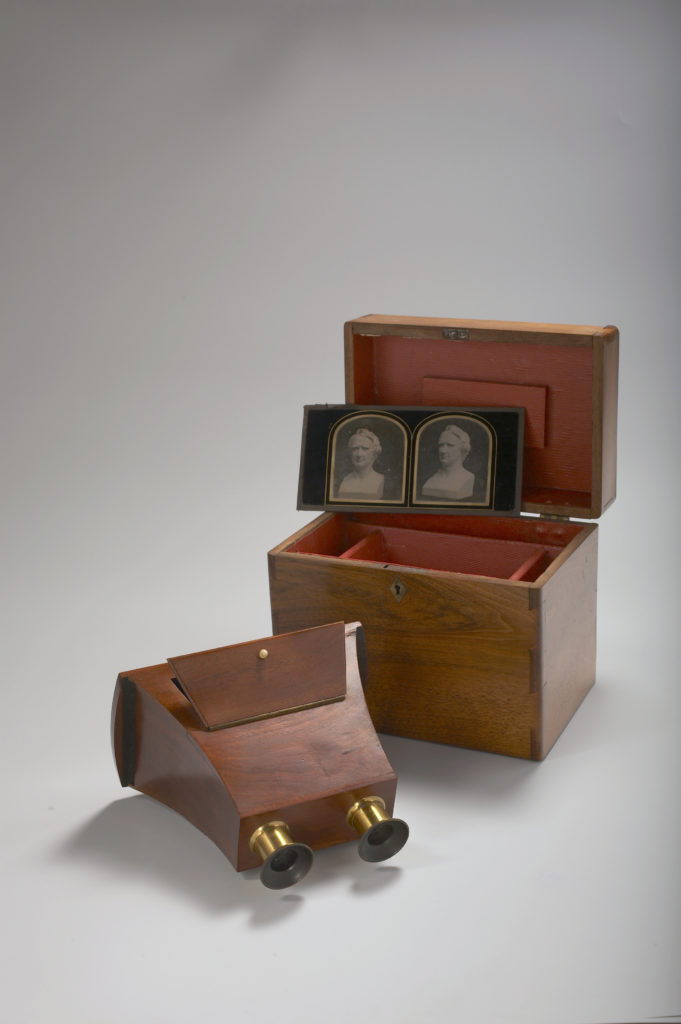 Closed stereoscope and its box, Duboscq, Paris, towards 1860.