From the 1880s onwards, Ottomar Anschütz, a portrait painter from Lissa in Prussia (present-day Poland), became interested in analysing movement like Muybridge and Marey before him. He developed a series of shutters which enabled him to take exposures at 1/1000th of a second. Using a battery of cameras equipped with these rapid-fire shutters, Anschutz photographed the locomotion of horses, and military manoeuvres.

In 1886, Anschütz perfected the zootrope, an optical toy which had been on sale since 1867. In place of drawings which broke down movement, he substituted his chronophotographic pictures, placing the blades between the images instead of on top of them. As a result, successive exposures became visible, printed horizontally or vertically onto cardboard strips.

In parallel, Anschütz took an important step towards cinematographic projection. In 1887, he developed the Electrotachyscope, a disc on which transparencies were mounted, each representing different stages in a movement. As the disc turned, thanks to an electrical contact mechanism, each image was briefly lit by a gas tube (the Geissler tube) which lit up when an electric current was put through it, thereby bringing the movement back to life. Projection thus disappeared, as the one- or two-second animated sequence on the disc could be seen directly. This machine, which later went on sale, subsequently made it possible for a limited number of people to enjoy the spectacle. 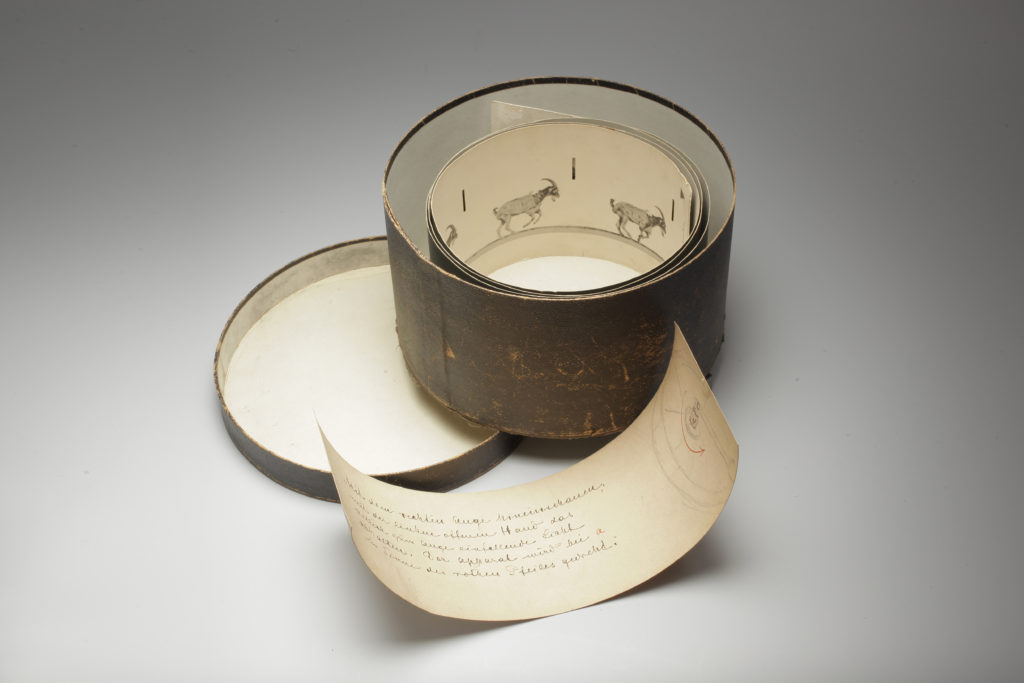 Original zootrope soundtrack with its handwritten instructions, Ottomar Anschütz, Prussia (now Poland), Lissa, circa 1890 Anschütz substitutes his chronophotographic shots for the drawings decomposing the movement and places them in a zootrope of its manufacture. He imagined a device where the slits are between the images rather than above them.